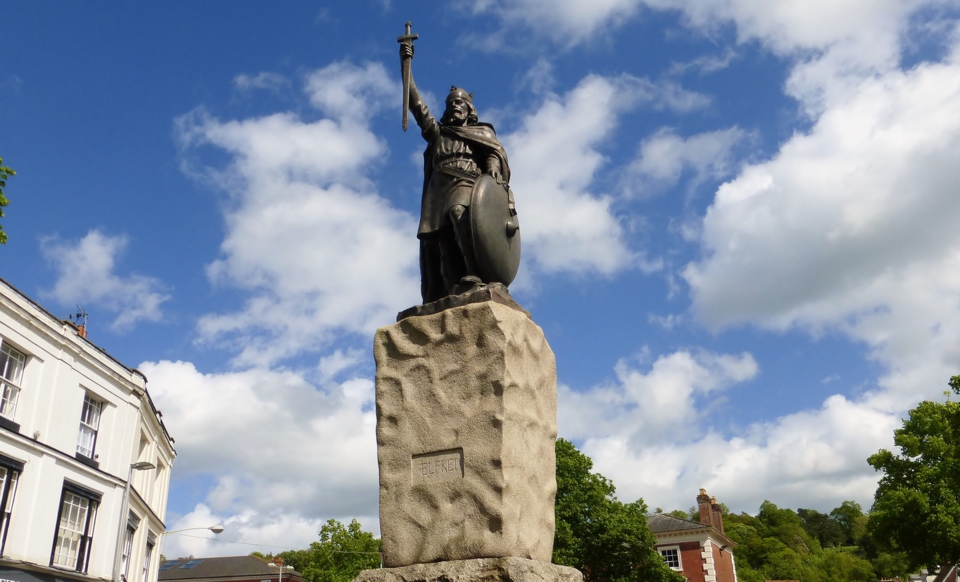 Winchester is England’s ancient capital and former seat of King Alfred the Great.

Modern day visitors to Winchester can’t help but soak in the history as they wander through the ancient streets of this small city.

Winchester Cathedral with fifteen centuries of English history lying behind this massive Cathedral. It stands at the heart of historic Winchester, once the seat of Anglo-Saxon and Norman royal power, on the site of an early Christian church. 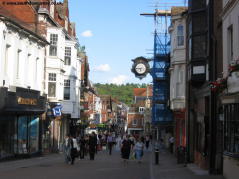 After visiting the cathedral take a short walk along the pedestrianised High Street.

A good lunch opportunity with a choice of restaurants.

Winchester began around 70BC as a Roman town called Venta Belgarum and was made a civitas or regional capital. In the middle of the town was the forum. This was a marketplace lined with shops and public buildings.

407 the Romans left Britain and town life broke down and seems to have been abandoned.

Saxons arrived in the 6th Century and called the Roman settlement a caester and then Venta Caester. In time changed to Wintancaester and eventually became corrupted to Winchester.

Alfred the Great in the 9th Century revived the old Roman town. To defend his kingdom he formed a network of fortified places where men could gather to fight the Danes whenever necessary. Winchester was rebuilt with the streets laid out in a grid pattern and people were encouraged to come and live there. Soon Saxon Winchester was flourishing.

From the 10th century there was a mint in the town. Winchester may have had a population of about 8,000 and there were suburbs outside Westgate and Northgate. There was also a Royal Palace in Winchester. It was probably built in the early 10th century.

William the Conqueror, the first Norman King of England, rebuilt the Royal Palace in Winchester. The new palace was twice the size of the old Saxon palace. William also built a castle in the west of Winchester.

After 1079 the Normans demolished the Old Minster Cathedral and built a new cathedral on the site.

12th and 13th centuries Winchester declined and the Royal Mint moved to London.

During the 18th century much of Winchester was rebuilt with many Georgian houses and some old houses were given a Georgian facade. The population was about 4,000 early in the 18th century and was still less than 6,000 in 1800. Winchester had become a quiet market town and had declined a long way from when it was the capital of England.

19th century prosperity returned to Winchester. This was largely because of the railway, which reached Winchester in 1840. This made it possible for tourists to travel easily to Winchester. The railway also encouraged new industries to move to the town.

In 1901 a statue of King Alfred was erected to commemorate the 1,000th anniversary of his death.

In 1939 hundreds of schoolchildren from Portsmouth and Southampton were evacuated to Winchester as both cities were bombed heavily.

Population of Winchester is now about 122,000 relatively small when compared to Southampton with 255,000. 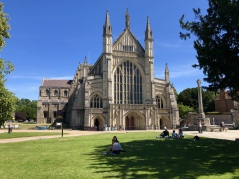 Winchester Cathedral is one of the largest in Europe. The first stop on our visit taking about an hour for either a self-guided tour or joining a group. Tours are provided by the cathedral and depend upon availability.

A royal Anglo-Saxon church. Today’s Cathedral has its roots in the seventh century, when England’s pagan monarchy first became Christians.

635 Cynegils, king of the West Saxons, was baptised. Just over a decade later, his son Cenwalh built the first Christian church, known as Old Minster, in Winchester, the heart of Anglo-Saxon Wessex. Old Minster became a cathedral, the most important church in Anglo-Saxon England, healing place of pilgrimage and burial place for some of the earliest kings of Wessex, including King Alfred the Great.

The church was made bigger and grander by its 10th-century bishop, Aethelwold. The bones of St Swithun, a former bishop, were dug up from its forecourt and housed in a splendid new shrine inside. St Swithun’s fame spread far and wide. All round his tomb, the walls were hung with the crutches of people he’d healed.

1066 William the Conqueror successfully invaded England from his duchy of Normandy. He replaced Winchester’s last Saxon bishop with his own royal chaplain, Walkelin. The French bishop set about building a huge new church in the Norman Romanesque style.

After 450 years, Old Minster was demolished. You can still see where it stood, its outline traced in red brick, just north of the present building. Its stones were used for the new Cathedral, consecrated in 1093 with a great ceremony attended by almost all England’s bishops and abbots.

You can still see the Norman roots of our present Cathedral in its massive, round-arched crypt and transepts today. A thriving medieval Cathedral. The Norman Cathedral flourished. William Rufus, William the Conqueror’s son, was buried here in 1100.

1530s A new Church of England. The dissolution of England’s monasteries under Henry VIII, in his dispute with the Catholic church of Rome, was a catastrophic upheaval. All were swept away. A few, including Winchester, were re-founded as cathedrals.

Early 16th century much of the Cathedral you see today was complete.

Early 1900s there were fears that the east end of this ancient building would collapse, after centuries of subsidence. Deep-sea diver, William Walker, worked under water in total darkness for six years to stabilise them.

After 12 centuries, this great Cathedral church remains the seat of the Bishop of Winchester and Diocese of Winchester.

Jane Austen is now celebrated as one of England’s greatest novelists, but when she was buried in the Cathedral in 1817 at the age of 41, her original memorial stone made no mention of her books. You can read the brass plaque erected in 1872 to redress the omission in the north side aisle and an illustrated exhibition detailing Jane Austen’s life, work and death in Hampshire, is displayed beside her grave. 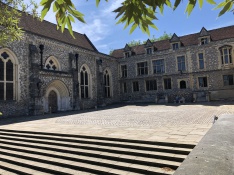 The Great Hall Museum holds much information about the history of Winchester. Housing the iconic Round Table of King Arthur.

Your Winchester tour - Parking next to the cathedral and centre everything is within easy walking distance.

About thirty minutes from Southampton and five minute detour from the main route to and from London. An hour is normally adequate time to visit the cathedral with a short walk along the pedestrianised main High Street to The Great Hall Museum for a 30-45 minute visit. Another hour allows a lunch opportunity or further exploration on foot. As always, your local personal driver will be on hand for options and guidance.

The perfect trip if time is short. A fascinating historic city full of atmosphere and charm.