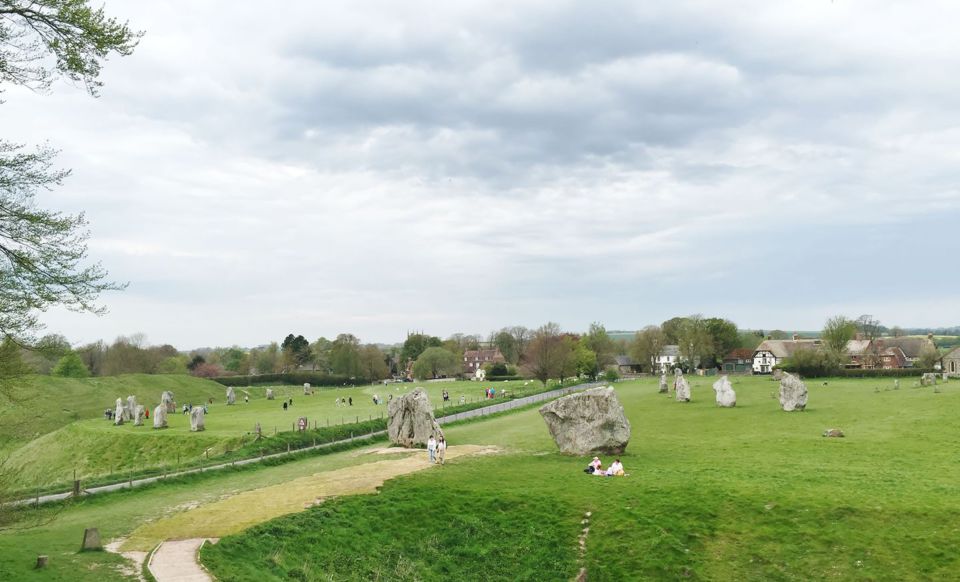 A World Heritage site managed by National Trust on behalf of English Heritage.

Avebury is a quaint Wiltshire village about an hour and a half from Southampton Cruise Port and about 45 mins from Stonehenge.

An ideal alternative to Stonehenge. Not as well known and, as a result quieter with less visitors, Avebury equals Stonehenge in age, mystery and visitor experience.

Avebury henge and stone circles are one of the greatest marvels of prehistoric Britain. Built and much altered during the Neolithic period, roughly between 2850 BC and 2200 BC, the henge survives as a huge circular bank and ditch, encircling an area that includes part of Avebury village. Within the henge is the largest stone circle in Britain - originally of about 100 stones - which in turn encloses two smaller stone circles.

Avebury is part of an extraordinary set of Neolithic and Bronze Age ceremonial sites that seemingly formed a vast sacred landscape.

In the Middle Ages the stones may have been associated with pagan and devil worship and many were either buried or destroyed. Later building and agricultural improvements led to others being removed. Records and maps made by early antiquarians give us some clues as to its former layout.

The appearanc of the site today, however, owes much to Alexander Keiller who bought the site and cleared away buildings and re-erected many stones in the late 1930s.

What to expect - Suitable for those with more available time, due to the route taken by Southampton Cruise Tours, being about an hour and a half, travelling through the pretty countryside via Salisbury, Old Sarum and Stonehenge before the last 45 minutes to Avebury.

Arriving at a dedicated visitor car park we follow a short footpath adjacent to one of the stone circles and into the centre of Avebury. A National Trust run Visitors' Centre telling you all about what is known about the stone circle and henge. Usual facilities such as a cafe, shop and rest rooms.

Guided Tour - Periodic walking tours of the site is highly recommended. Lasting about 45 minutes to an hour and costing only a few pounds. Limited walking to explore and learn about the stones and henge.

Decent footwear is recommended for grassed areas that can be wet and muddy.

A perfect alternative to Stonehenge and suitable combination with Salisbury Cathedral and City.